A while back we sent our Cyclone battle rope to fitness blogger Electra-Fi so she could test out our ropes and create a fun workout with them. Here's what she had to say: 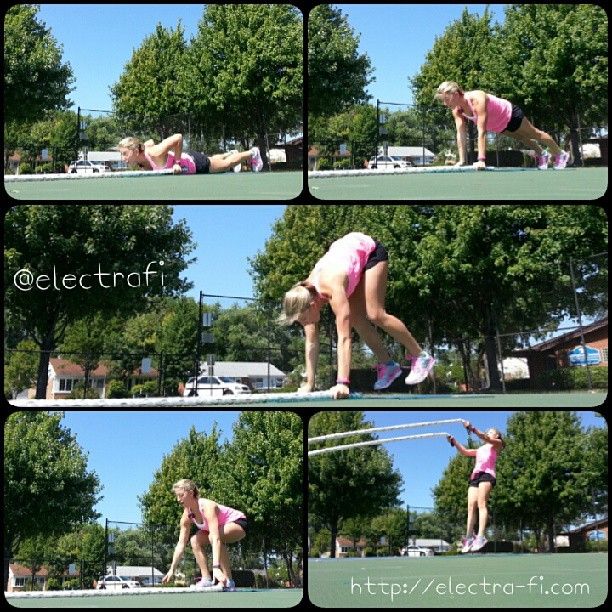 "As a side note before I get into the nitty gritty about the muscle ropes and share my killer workout with you, I was super impressed by how the rope was coiled up in the box when I received it. As a test, I tried to put it back in the box after using it to see if I could neatly coil it up like they did, and let’s just say it looked like the box shrunk and didn’t fit the rope in it anymore! Those are some talented distributors! They sent me a Cyclone rope, but they have many different ropes (all made in the good ‘ole USA – which is a huge deal for me!), including different size muscle ropes (for all ages and athletic abilities), climbing ropes, giant jumping ropes. I can only imagine jumping rope with a giant rope! Muscle Ropes is a small business that sells almost 30 miles of rope every year. 30 MILES OF ROPE!? More than a marathon of rope every single year! The rope has held up to the workouts I’ve done, and the handles seem to be very high quality, which is huge since many ropes lose their handles quick.

Anyone who has done a high intensity workout knows that 30 seconds – 1 minute isn’t a quick as it seems. This rope takes that to an entirely different level. 20-30 seconds flies by you say? Grab a muscle rope and you might think differently!

That’s not to say it’s not a blast, because I’ve had fun incorporating this piece of equipment into my workouts. I’m guessing you’ve seen a rope, often called battle ropes, lying around your gym or fitness studio, or being used in a crossfit box or on TV. The Biggest Loser uses muscle ropes, as do many branches of the military. It’s fun to watch someone utilize this piece of equipment, but until you try it, you don’t realize how deceivingly challenging they are. It’s like a pistol squat or some of the interesting core exercises I’ve posted. They don’t look too challenging until you actually do them and FEEL. THE. BURN. right away! It’s fun to incorporate something like this into your workouts every now and again because it challenges you, recruits different muscles, makes you more functional, and brings in variety, which keeps working out and sweating fun!

And without further ado here's her battle rope workout, think you can handle it?

There are 6 exercises, all exercises are to go in order of the circuit with the timer 30 seconds on, 30 seconds rest, and will all be repeated twice. You may think you won’t need 30 seconds of rest, but even after the first exercise, you’ll appreciate the equal rest to exertion!